At first glance, this is not a board hack.  I’ve been working more and more with remote teams lately, and that makes the use of physical, easily hackable materials much more difficult.  So my concept of a hack has altered slightly.   What ‘hacks’ to the physical process will make it work for a team that is not co-located?

I’ve run retros where a couple of team members have been remote.  And I always make sure to enable them to participate as fully as possible in the physical sticky note activities – by getting them to message/slack.text them to me so I can write them up.  But what about when everyone is remote?  What happens then?  Last week I ran my first retro where the entire team was remote. That’s right, not one of us was in the same room!

So my beloved post-it notes were replaced with a tool called stickies.io. It lets everyone log into a shared ‘wall’ where they can individually create sticky notes, then we can group them, vote on them and discuss them.  We used Google hangouts, with chat and also Slack for text communication.  It certainly was not as good as a physical interaction, but it turned out better than I expected. 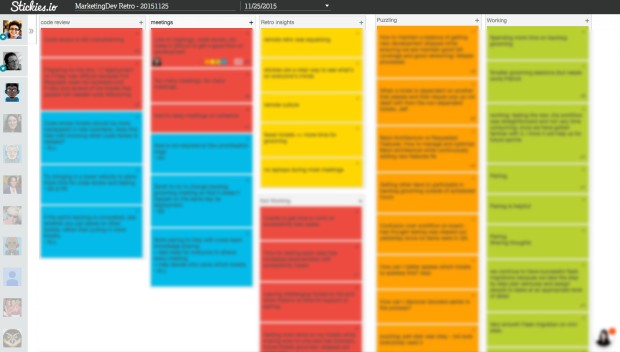 What did we learn?

stickies.io has a handy feature that allows the facilitator to switch the board to incognito mode so that everyone can focus on just their own stickies – solo brainstorming.  Of course, there’s always someone who wants to game the system, so in less than a minute one of our developers had hacked this too.  Not quite the kind of hack I hope for…

This entry was posted on December 4, 2015, 1:16 am and is filed under Uncategorized. You can follow any responses to this entry through RSS 2.0. Responses are currently closed, but you can trackback from your own site.