This lego board serves a particular need by a team in a unique way – like all the best board hacks do.

The team started by quickly building a prototype wall using index cards with  mail-merge stickers on them describing each procurement project. This information had previously lived in a spreadsheet. With the work quickly thrown up onto a wall, they asked themselves the question: “What is this wall not telling me?”.

Answer: a lot! There were so many cards it was hard to see what was going on. They were hard to read. And the wall couldn’t tell the team anything about cycle time: how long was each project taking to go through the whole procurement process?

Additionally, one of the team members had a visual disability, so the team wanted something with high contrast and large lettering. This was going to be hard to achieve with cards, given the number of procurement projects which were in flight at any time.

With this learning, the team built a second board, this time from Lego.

The left hand side of the wall is fairly familiar – a line for each project, with columns for portfolio (coded by colour), category and status, as well as the cost of the project.  It’s over on the right that the fun begins.  The grey lego base board is divided horizontally into sections for each team member – who is limited to no more than 7 projects on the go and has their own little lego avatar and a “one brick” row 2 lugs high for each project.  Vertically, the board  is divided into weeks. 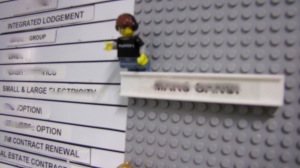 Team members get their own minifigs and each is limited to 7 lines and therefore 7 projects.

Each project is tracked using a lego brick.  The size of brick indicates expected length of delivery of the project  and the colour indicates the procurement stage that the project is currently in.

At the beginning of each stage of procurement, a project’s lego brick starts in week 1 and progresses on from there.  At the end of each stage, the number of weeks spent is recorded on the edge of the brick using a sharpie, the appropriate colour brick for the next stage of the procurement process is stacked on top of the previous, and the stack of bricks goes back to week 1.

Each lego layer shows cycle time for a stage of the procurement process in weeks, together making up the whole project.

Team members can read weeks of cycle time for each project off the scale at the top.

So it’s easy to see:

Revenue on a Card

Sometimes it feels like the agile community knows the cost of everything, and the value of nothing.  We have clever ways to measure velocity and to estimate the size (and therefore cost) of pieces of work, and we like to obsess over these. But when do we ever quantify the value which will be delivered by a piece of work? Relative value is taken into account when a product owner prioritises higher value stories in the backlog, and some methodologies do take a shot at quantifying business value nowadays, but I don’t see much evidence of teams trying to quantify the value of a piece of work either before, or after it is delivered.