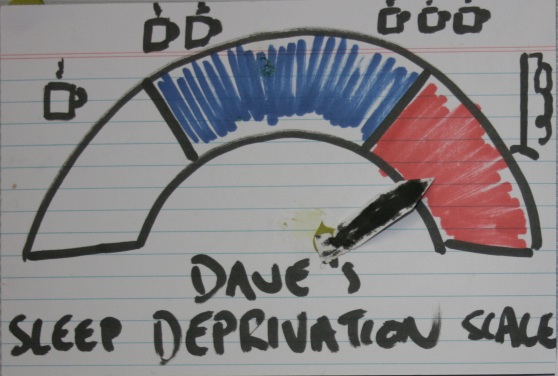 Here are some interesting facts* about (lack of) sleep that you may not know:

How does that affect you at work?  My mate Dave knew it affected him badly, so he came up with this visual hack to let people know how he was feeling.  He says:

“We’d just had Hamish, and were in the sleeplessness death zone a lot of the time. But at work we were in the crucial months of getting data ready for a new site, and I was the go-to guy for a whole bunch of content things. Some days I was capable of rational thought and decision-making; others, not so much. So this meter helped give people a kind of reliability quotient for anything I said that day.”

Thanks to David Burnett for this hack.

This entry was posted on March 2, 2013, 6:36 pm and is filed under If we tell you we'll have to kill you. You can follow any responses to this entry through RSS 2.0. Responses are currently closed, but you can trackback from your own site.